Don’t do quack, it kills

Upstate New York didn’t participate in summer this year so the transition into Fall was fairly easy. I’m equally excited for this time for two reasons. First, I’m in nowhere near the amount of discomfort as I found myself this time last year as an 8 pound midget flailed around inside my body taunting me with her matrix like moves.  Second, Fall means that it gets cooler and that means that….a) snow is coming and I love snow  b) Christmas is coming and I love Christmas c) construction is wrapping up and I f’in hate construction. One of those things is not like the other!

Since Cardin debuted just a few days into November last year this was her first official Halloween. I figure for the first couple years of her life I’ll get the sweet revenge of choosing what she wears for Halloween before she starts berating me with expletives about how I’m not cool if I don’t let her have the dora the explorer backpack. GRASSY ASS.

Initially, I wanted to dress her as a whoopee cushion and I was high fived all the way for this, until I got to my husband and my mother who had to poop on my parade. POOP. ON. MY. PARADE.  Then we moved on to either Elmo or a Kitty. Mommy looked at the price tags on those costumes and just kept walking. Listen Lady, some of you may give your kids the world on a silver platter. I’ll give them a cold, hard dose of reality. Mommy ain’t made of money, she doesn’t shit quarters, and that bush growing in the basement doesn’t produce money.  You’re going to wear this costume for about 20 minutes, there is no way in this galaxy I would spend $49 dollars on it. Oh yea….and Santa isn’t real either. I’M A HORRIBLE PERSON. And people in Africa don’t wear shoes, it all evens out in the end. I finally settled on a duck costume that was not the price of a kidney on the black market. 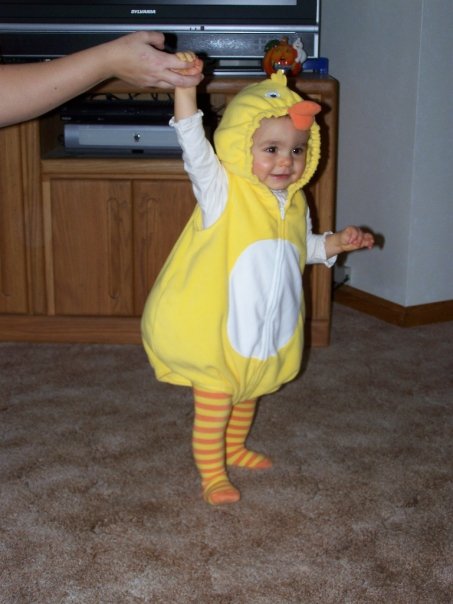 AND THEN IT HIT.

THE SWINE. I got the flu. Two days before Halloween and I’m in bed fevering my way through life. My hair even ached. It sorta, kinda, maybe, just a little, killed Halloween for my kid. Since she can’t really eat candy and she can’t really walk very well the whole trick or treating thing would be lost on her, but we had planned to take her around to see some family and friends on Halloween in her duck costume. This would also ensure that I got the most use out of the money I spent on this duck outfit. FAIL. This is one of those times I’m grateful that her neurons haven’t fully formed and she won’t remember anything till she’s at least two.

Through all this, I was determined to hand out two things to the neighborhood children on all Hallow’s Eve. Candy and a helping of H1N1. What parent wouldn’t love if their kid came home with an unbeknownst, festering virus just seething to run rampant? HANDS IN THE AIR!! wOOt wOOt. How do you like that? AT LEAST YOU HAVE SHOES!!! In reality, I’m a decent human and my dad was nice enough to come over and hand out candy to the masses. Don’t think I didn’t stand over the candy bowl and breath on all those snickers and milky way though. FOOLS.