A month ago we noticed that the bathroom window was starting to rot on one of the corners. We had previously replaced the front living room picture window with a local company so we called them back up and they came out and gave us a quote for replacing the bathroom window, which included a 22% discount. Fancy that…I didn’t even need a coupon.

We signed a contract and not a week later we got a piece of mail from  the window company stating that if you had been a previous customer, they were willing to offer up to an additional 10% off if you signed a contract to do work by the end of June. FML. I called up the sales guy and kindly reminded him that we were a previous customer and oh….remember when I asked if this was the best you could do on the price and you told me “ABSOLUTELY”. Turns out there was more wiggle room. I just needed to go in and sign an addendum to get that additional 8% to boost me to the full 30% off.

Before I left to sign the addendum, I thought it would be of utmost importance to determine a rough number for this additional percentage that should be deducted. Except for one minor detail. I don’t excel when it comes to math equations. And when I say I don’t excel, I really mean that my brain shuts down and I go into paraplegic shock when numbers are involved; hence the reason i WRITE a blog with LETTERS!!! I’ve never liked math, throughout school I sorta just satiated my teachers with long equations and lots of scribbling. Anything involving an equation was excellent because I could elaborate that by writing out all my work and making it look as though I really knew what I was doing; I was notorious for this in statistics. TRICKS OF THE TRADE MY FRIEND. Another tip…counting with your fingers. Don’t be ashamed, it’s a perfectly acceptable form of validation; especially when you have been up till 2 am and the can of Blue Light is half empty.

I digress Internet. Brett never misses an opportunity to point out my misgivings in math (thanks hon) so he was assisting me in determining the amount of money we could expect to receive off from the window company. As he was doing so he was using some convoluted math style that did not follow the rules of PEMDAS. Some of you may not know it as PEMDAS, but instead know it by “Please Excuse My Dear Aunt Sally”. 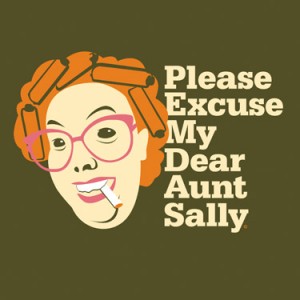 It is the order in which you solve an algebraic equation; that is, parenthesis, exponents, multiplication, division, addition, subtraction.

I was so kindly taught these strict algebraic rules by an oompa-loompa sized  man we referred to as Mr. Vogler who sported one hell of a mustache. The man sucked down 50 cups of coffee a day and drove off campus to smoke cigarettes like a chimney. I imagine that he was never “teacher of the year” and that many of his co-workers avoided him. The man could holler up a storm and he was militant in his use of PEMDAS.

When I pointed out to Brett that he was not using PEMDAS to figure out this problem he brushed me off as though it was irrelevant. LISTEN LADY, both your parents are MATH TEACHERS, they should have taught you the strict militant rule of PEMDAS. Division was occurring before multiplication, percent signs were being thrown about with wild abandon, ALL HELL WAS BREAKING LOOSE. We went on for a good 15 minutes over this lax use of PEMDAS; I was completely  discouraged by standards that Hilton was placing on their students if they are so easily throwing Aunt Sally out with the Sunday trash.