I’ve infrequently ventured outside the house lately because my belly seems to be smashing into inanimate objects and small children. Because of such, Cardin hit up the mall with my parents to go see the Easter Bunny. They kindly documented this occassion for me. 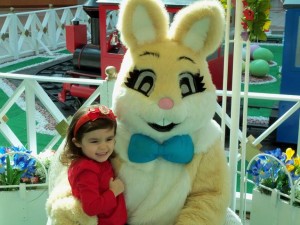 On a side note, I’m a little sad that she actually calls him the Easter Bunny now. Last year, she would only refer to him as the Easty Bunny; which is, by far, a superior name.

Unlike with Santa, she seems to have no fear of the Easter Bunny. She jumped right up into his lap and smiled away for a picture. I don’t find the Easter Bunny as particularly disturbing as Santa Claus so I’m more on board with her visitation. Perhaps it’s the soft fur, fluffy tail, or the drugged out stare eminating from his eyes that lulls me into complacency. 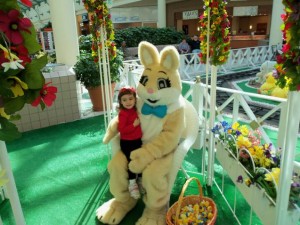 While sitting in his lap, Cardin proceeded to ask him, “where do you live?” Listen Lady, I can totally follow her logic. Santa lives in the North Pole and after Christmas, when all the decorations come down, he returns to his humble abode so he can start to make toys for next year. By the same conclusion, the Easter Bunny must go somewhere once all the Easter decorations come down. Where you livin’ at Bitches!!!!!

Since the person that portrays the Easter Bunny is not allowed to talk, ya know….for fear of giving away homeland secrets, Cardin received a blank stare directly followed by one of those AWKWARD SILENT MOMENTS.

The Easter Bunny quickly picked up a basket of small toys and thrust it at Cardin; hoping to avoid any further communication. This seemed to appease her; Cardin picked out a rubber ducky and went on her way to go ride the merry-go-round.