For those of you who have been living under a rock the past 6 weeks, we’ve been going through a bit of a dry spell. In fact, tomorrow’s forecast calls for record swamp ass!

As such, we have spent time each evening watering the landscaping that we put in last summer. You’ll recall my grandiose introduction of Maurice the Maple. He is flourishing in his new home; mostly attributed to fact that I provided him a vibrant, confident name.

Unfortunately, all this watering and humidity caused a bit of water damage to our front door. You see Internet, our front door was the original that came with the house back in ’65; so basically a wooden piece of garbage. It certainty served it’s purpose for 50 plus years, but it was no longer holding up it’s end of the bargain; for example, shutting. Through and through one of the main features of a door.

After a bit of research into replacement costs and figuring out that this was not an activity that we wanted to even attempt to undertake ourselves, we decided to hire a contractor. Listen Lady, we might have been able to do it ourselves, but there would have been a lot of cussing, it would have taken forever, and I guarantee you we would have made at least 5 trips to home depot.  In the end it was totally worth shelling out the $200 to know that it was done correctly.

Replacing the front door was a cost we didn’t expect to incur this summer, especially since we still need to lay the stone for the rest of the landscaping. Luckily, we were able to sell off a huge majority of Cardin’s baby clothes and that netted us a good chunk of money.

Since we were getting a fancy new front door, I also insisted that we replace the storm door that bites me every time I leave the house. This new storm door has a full screen, so it helps with ventilation in the house too. Looks a smidge better. 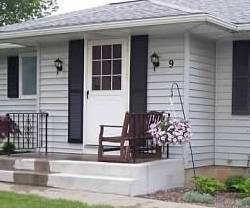 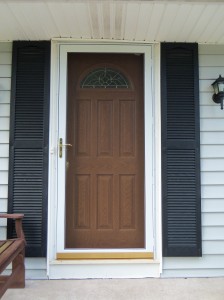 Sooner or later we’ll have replaced just about everything in this damn house.