My kid refuses to eat dinner lately. No idea why. She eats breakfast and lunch as if she were one of those poor little kids you see on the “save the children” infomercials. All the while the host reminds you that changing the channel is like saying no to these starving children. And I’m all…click to the next channel; without remorse.

On top of the outright refusal to eat she hasn’t sprouted a tooth yet. She looks like my 80 year old grandpa when he removes his dentures; her gums all flappin’ when she says “momma”. On a side, do you think they make baby dentures? No teeth leave little to the imagination of food she can actually gum to death.

We tried playing with the food and making faces on the highchair tray. No go. We’ve tried putting her in front of the TV to distract. Worked for a little while and then she figured out what I was trying to do and kicked me in the shins. On to my new method…food mixture.

Last night I made her a scrambled egg figuring it was new and soft enough that she could gag it down with little to no effort and there is the added benefit of protein. Three spoons later and I have a face full of egg. AWESOME. And people tell me that I’ll actually want more children after experiencing all the joys she can bring to me. 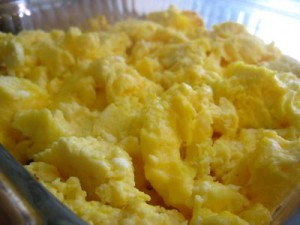 Fear not though Lady, I had a plan B; vanilla pudding.   J-E-L-L-O. We made it 5 spoonfuls without a hissy fit so I figure this is going pretty damn well. And then I get a genius idea. Confucius like.

Mix the scrambled egg with the vanilla pudding!

Listen Lady, I don’t care how it tastes as long as she EATS IT. I’m not going to have her walking around in shredded clothes, no shoes on her feet, a fly on her face, asking some poor stranger not to change the channel. Would it have been any better if the eggs are green? Dr. Seuss would so be on my side.

And just think, she had protein and calcium all in one. Please, save your applause while I go up and get my mother of the year award.