I get enough junk mail to paper machete a few hundred body casts. Most of the crap I just end up throwing out because I don’t have enough time to pick my own wedgies let alone read 25 magazines. There are the occasional few that I do browse though and did I ever find a doosey in one. 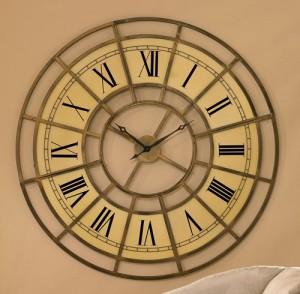 A colossal wall clock. This isn’t just an ordinary wall clock. Nope my friend, it’s COLOSSAL. This puppy is 5 feet in diameter. FIVE FEET. That’s like hanging me sideways on your wall. Hell, tack me up there and I’ll even use my arms and legs to point to 10 and 2.

The description says that some assembly is required. My guess is that you’ll need to frame out an entire clock tower before you even open the packaging. The magazine also suggests you use bolts for secure hanging. I would just like to say, “No Shit, Sherlock”. I thought we could just smack some masking tape on the back and call it a day. Though you might want to consider additional home owners insurance as I’m sure you are going to rip down half your house if you don’t secure this clock with earthquake resistant fasteners.

Good news though. No matter how COLOSSAL this clock is, it only requires 2 AA batteries. THAT’S IT. Totally disappointing. I was under the impression that this clock would require the same amount of electricity as needed to run a small town in Rhode Island. Who knew that such a large heaping mass of metal would be so green.