Many a moon ago, when we originally purchased our house, we had every intent of removing overgrown and unmaintained shrubage from the landscaping all in one summer. And I’m not talking small little bushes that a retarded monkey could care for. Most of these bushes were taller than I am and their roots were as thick as my forearm. Imagine if you will, a small little seedling, planted decades ago that exploded ALL OVER THE PLANET and you will have the size of these damn bushes.  I mean, the guiness world record book was contacting us. 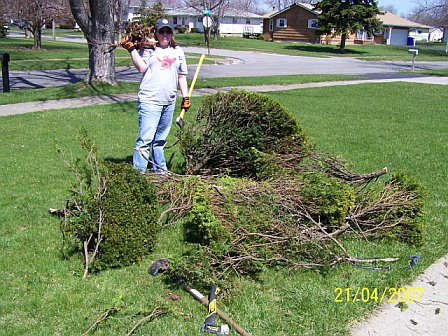 Oh to be young and naive and believe that we could remove all the bushes and the 50+ year old stumps in just a couple of months time. The first summer we managed to mangle about 5 bushes out of the ground and break only 1 shovel before winter hit. I don’t know about you, but I wasn’t about to don my parka and start hacking away at a frozen stump. We put our plans on hold and agreed to resume extraction the next summer.

Little did we know, the extraction that occurred was of a much different nature than we intended. It involved a cold pair of stirrups, a couple dozen doctors, and one stubborn little 8 pound old newborn. Summer number two became a bust as I had a live-in and I would throw a temper tantrum if the temperature went above 71 and I had to set even my pinky toe in the sun. My air conditioner became my best friend during that time. We would have long talks and go to the movies…. ok not really, but I HATED even one drop of sweat on my pregnant being.

I vowed that this would be the summer of stumps and we’d finally finish removing every last one; even if it meant that I had to set fire to them and dance around naked doing American Indian chants. Unfortunately, time got away from us a little and suddenly I changed the calendar and it was August. AUGUST. WTF MATE. We had not even looked at the stumps yet and it was nearly the end of summer. As a side note for those of you not from Western New York, summer lasts approximately 2 months for us and the rest of the year we have snow.

My husband diligently volunteered to stay home from work and spend his time hacking away at these suckers to get rid of the last 4 stumps (thanks honey for all that man work).  One ax, one hatchet, and one sledgehammer later…we have 4 empty holes in our backyard. Look at that stump family, so cute and innocent looking. So unsuspecting of their fate. YOU’RE BURNING BITCHES!