I was watching sesame street the other day with my daughter and Elmo was talking about noses. The furry red monster was asking kids if all different objects have noses. He asked if a bowl could have a nose or a baseball glove. And then he asked if an airplane could have a nose. 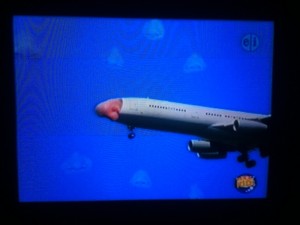 Tell me this doesn’t conjure up some interesting images? Listen Lady, sesame street isn’t a live television show, its pre-recorded, so you can’t even use the excuse that a producer or editor or HELL EVEN THE GUY WHO MOPS THE FLOOR didn’t see this image and say “hmmm….perhaps Elmo should ask if some other NON-PHALLIC object has a nose?”

Really fulfilling that motto of being educational for children. Keep going. Maybe Big Bird can explain the birds and the bees too.

Thank god for Tivo so I could pause and capture the moment.