A few months ago I pulled out my stockpile of Lego’s for Cardin. Both Brett and I loved Lego’s as a kid and we both brought container full’s into the marriage. Don’t be fooled, this is because I have such an active imagination.  Unsurprisingly, Cardin loves playing with them also. Obviously she can’t follow detailed instructions on how to build a Castle or Robin Hood’s tree forest, but she loves building with the blocks. She is equally enticed when you build something for her; like a house or a car. The other day I rocked her world when I built her a pool and then put only the upper half of the Lego man on the blue block, as though he was swimming. She looked at him for a solid 5 minutes in AWE.

Normally when I spread the Lego’s out, I  keep a watchful eye of where I step. Listen Lady, I’ve stepped on my fair share of pointy Lego’s and have used explicit language in expressing this discomfort. Having only been exposed to Lego’s for a couple of months, Cardin is less in tune with the accuracy needed to avoid a mine field of Lego pieces that strewn the floor.

The other day I was cooking dinner and I heard her rustling around in the Lego box. As I went in the pantry to grab something, I peeked in on her really quick. Ya know….to make sure she hadn’t swallowed a yellow head or stray block. Cause that would be an unfortunate tripe to the ER. What I found instead was the following: 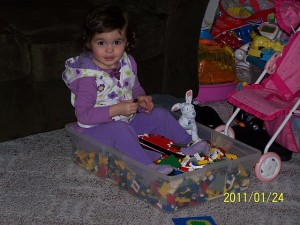 She had plopped her ass right on down into the Lego container. Clearly this was causing no discomfort and that can only be attributed to the extra padding provided by her diaper as she has a flat, non-padded ass just like her momma.