This past weekend we took Cardin to Disney on Ice. We had been preparing her all week that the guys from Lion King and Little Mermaid would be skating on the ice. Though, I prefer her chopped word of “kating” over the proper pronunciation of the word.

Before the show started we bought the obligatory toy that is required for all children in attendance. 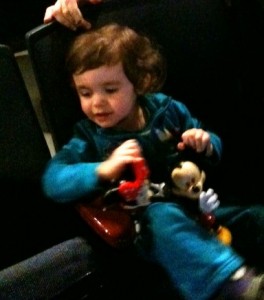 Cardin selected a 12 inch plastic Minnie and Mickey at the price of twelve bucks a pop. Of course she insisted on having both and not just one character. I’m too much of a schmuck to say no. Forget Brett…he’d buy his little girl one of every toy.

Listen Lady, I really must commend the marketers for these shows, as they know all the tricks for swindling as much money out of poor, unsuspecting parents as possible. You see internet, they have at least a dozen souvenir stands. Not only have they increased the ease at which you can find a souvenir by covering more surface area, but they have also increased your exposure to them. And of course every time your kid walks by a different stand they are attracted to the overstimulation of sound and light and thus beg for another toy. One which, more than likely, be destroyed within a few days.

We arrived at our seats and were pleasantly surprised to find that we had a few rows of adequate spacing. Happy that nobody was going to be all up in my buisnazzz, I spread out our belongings across a few seats. The show began within a few minutes and immediately Cardin was in a trance. A bomb could have gone off at the other end of the arena and her stare wouldn’t have budged.

After a few minutes the characters from the Lion King started to skate out and do a little rendition of “I’m gonna be a mighty King”. Lion King is one of her favorite movies and we have watched it about 10 zillion times. She has her own language when referring to the characters:
lions are “roarssss”
timon is “moan”
Zazu is “bird”
Elephants are “PHWWAAUUUAAHHH”
Monkeys are “bobo’s”

After every song, the arena would burst into a clapping fit and Cardin would catch on. This continued and each time the arena applauded for the performers she would look at Brett or I and scream, “CLAP”. And not in a subtle way, more like a Gestapo swinging a sledgehammer to your head sort of way. It became such a joke that we began to purposefully not clap just to see her reaction. Is it horrible that I provoke my child in such a way? Probably, but I’m ok with it because I know there will be a time when she tries to elicit a reaction out of me. 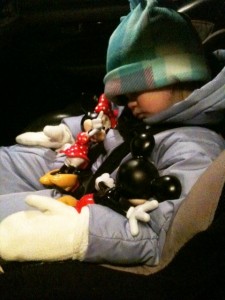 By the end of the night, the three action figures were worn out.