Cardin’s hair is getting long now and in recent weeks we’ve noticed that it falls into her face while she is playing. This is followed by a massive rampage on the follicles to brush them away from her eyes.  Well internet, two year olds fine motor skills aren’t completely developed yet and brushing the hair away is pretty much equal in comparison to a full on seizure for her. Her hair ends up messier and more entangled than before the whole process began. The majority of the time, the first attempt fails and there is an encore of furious little fingers fighting in desperation against the curls. 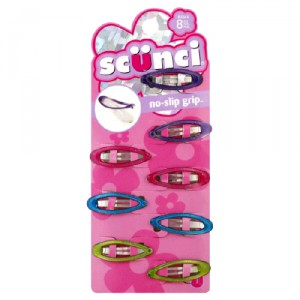 To counteract this I brought some little barrettes to put in her hair. I’m not really sold on the idea and, personally, I would not wear these little fairy wings so I can’t really blame her for the reaction that they elicited. It was not unlike trying to wrestle a cougar.The first morning I went to put the barrettes in her hair she saw me coming and immediately turned on the teenager attitude, “NO. ME!” (really looking forward to seeing that attitude more often). She looked at the little barrette but was not impressed at it provided no entertainment to her. However, once she realized that I wanted to place the barrettes in her hair and that they had to maintain position there, the referee appeared from behind the dresser and screamed “ARE YOU READY TO RUMBLE”?

The barrette was hurled out of her tiny hand and I was so caught off guard that I ducked as though I was dodging a solid punch to the face. Listen Lady, do I really need to use a bob and weave technique to put barrettes in her hair? I collected myself and attempted with another barrette. That’s when the screaming started. Followed quickly by tears and hyperventilating. Last but not least came the throw up gag.  Really kid? This is a little overdramatic now. I’m not asking you to go on Toddlers and Tiaras here….it’s just a freaking barrette.

Had it been summer and my doors and windows opened I’m sure one of my neighbors would have called child protective services.

Let’s just leave it at this….mommy was defeated that day.