As I was perusing the aisles in Wegmans this weekend, I came across an item that sent me flying back to my carefree childhood days. GRAPE KOOL-AID!!!!  Pardon me while I burst through a wall and scream “OH YEAAAAH”.

My childhood was filled with enough Kool-Aid to fill an Olympic sized swimming pool. I don’t care how old I get; I will always love Kool-Aid. Even now, whenever I go to my parent’s house, there is a pitcher full of Kool-Aid awaiting my sweet lips. It is a universal drink folks and it is age agnostic. 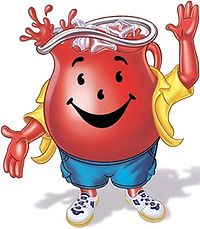 It wasn’t so much the presence of the grape Kool-Aid that titillated me.  I’ve seen the pre-mixed containers of grape Kool-Aid and there are the old school do-it-yourself paper packets where you must add the sugar (who has time for all that hullabaloo?) What I had never laid my eyes on before was grape Kool-Aid Singles; ready to be dumped right into a bottle of cold, refreshing water. Kool-Aid on the go! GENIUS!! It’s like a flask for kids.

Now, I’ve been exposed to the single packets before, they are not a new concept to my tiny brain; but  grape Kool-Aid is regarded as one of the untouchables in the caste system. It’s rarely touted as one of the premiere Kool-Aid flavors. Listen Lady, you never see The Kool-Aid man in a nice hue of purple, he’s always shown as a smiling pitcher full of cherry. Apparently the diversity at Kraft Foods does not include a concord purple and that is disheartening. 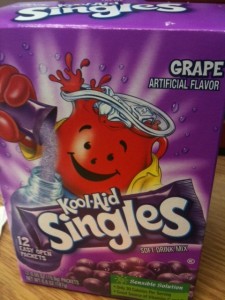 For me to find grape Kool-Aid singles was a thing of beauty.  Without question I put the box into my cart. When I got home the first words out of mouth were, “I FOUND THE GREATEST THING EVER!” My husband’s response was, of course, “Oh God.” He doesn’t quite appreciate the beauty and uniqueness of this find.

I brought the single packets to work. And I’d be lying if I didn’t tell you that 5 out of the 12 packets have already disappeared today. Just as a side, that’s just shy of 85 oz of grape Kool-Aid……I think I need to pee.