Wherein we dismantle the TV stand

Brett turns 30 in 40 days, not that I have a countdown going or anything. Originally we were going to go to Vegas and celebrate his birthday and our 5 year anniversary. That didn’t work out so well when we had a big snowstorm and I found out that I needed new tires; $900 later, we weren’t going to Vegas anymore. We looked at a couple other options, but decided that it just wasn’t fiscally responsible anymore, what with the things we had coming up in 2011; weddings, grad parties, showers, a retirement party for my Dad.  We had also hoped to take another trip this summer with Cardin.

With disappointment, we let go of the Vegas idea. This required me to think of another gift that wasn’t boring in stature, significantly overpriced, and also worthy of a 30th birthday. Brett has wanted a big screen HDTV for quite some time and I have refused such a purchase, telling him that we cannot get a new one until the one downstairs bites the dust. Noting that the TV cannot “accidently” fall off the stand. I finally broke down and decided that the 10 year old TV needs to be replaced and this would suffice as a 30th birthday gift.

That is….until we brought the thing home. See this is the TV we bought a 47 inch LG HDTV.

Listen Lady, it doesn’t look that large in the store when you’re standing there comparing their sizes; sort of like a guy’s locker room. WHAT? Like that’s never happened in a locker room? Rubbish.

Once we got the TV home, we figured out that it was going to be too wide for our TV stand. You see internet, our TV 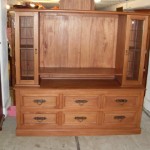 stand is more or less like a cabinet. It looks very similar to this…with shelves on either side and a top that spans that length of the cabinet. With a burst of ingenuity, I suggested we take out the shelves completely as we could more than easily fit the TV into the cabinet and would have space, width wise.

Dismantle step #1- remove shelves from a pre-constructed TV cabinet. Not as easy as one might imagine. Choice words were used.

PERFECT. Except for one little thing… the TV still didn’t fit because it was too tall when the stand was in place. REALLY TV?  Do you require that extra inch cause that’s all I need here. Apparently balancing the TV in place without use of the stand was not an option.

Dismantle step #2- remove the top of the pre-constructed TV cabinet. This was far easier, especially since we had already removed the shelves. Luckily the sides of the cabinet do not depend on structural support from the top.

Currently, the TV is sitting in this cabinet, but it has no top. We’re not sure what to do now. Buy a new stand, keep the current but dismantled stand, or Macqyver something together so the cabinet doesn’t look like a teenager going through their awkward phase.