After 33 years of working at Kodak, my dad decided that it was time to retire his polymer hat this past January 1st. This is pretty significant since there are few people who actually retire from Kodak anymore.  There are even fewer people who can actually say they have worked their entire career at one company.

To celebrate this milestone, my brother and I threw him a retirement party this past weekend. Some of his friends and previous co-workers came and much of the family was able to come. We surprised him with a cake that was decorated to look like a Kodak Film box. 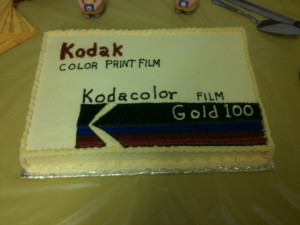 I’d like to take credit for this, but let’s be serious…my forte is really stick people. I ordered the cake from a local bakery and it was delicious. Except for the black frosting. The dye from the frosting was so intense that it tinted your mouth black. It reminded me of the prank candy you can buy that turns your mouth a certain color when you chew on it.

Cardin was amped about this party for weeks. She insisted that we make both a “BIG HAT” for Poppa and a “BABY HAT” for her. Listen Lady, she decorated the shit out of these hats.  Stamps, marker, sticky foam shapes, glue, confetti….whatever she could grab, she smothered the hat with. I wouldn’t doubt that she wiped a booger on there also.