Since the death flu killed my blogging for a few days, I need to catch you up on our trip to Niagara Falls. I’ve been to Niagara Falls a bunch of times during the summer, but have never seen the Falls in the winter time. Internet….there is really only one difference….it’s much colder.

Our hotel room had a great view of the falls and it was nice to be able to overlook them as compared to standing eye level with them. You can certainty appreciate the magnitude of the rushing water much better when you are above the falls. I imagine the same would be true if you were standing at the bottom of the falls. Just a guess.

We were surprised by the amount of mist that seemed to constantly swirl over the horseshoe portion of the falls, at times it was near impossible to see any of the water. We even got to see the falls lit up at night, which was another thing that I have never seen, as our previous trips had only occurred during the daylight. This was pretty cool, though I can imagine it would suck to be the guy standing on the ledge, holding the flashlight.

Here are some photo’s for your viewing pleasure. First the American Falls and then the Horseshoe Falls. 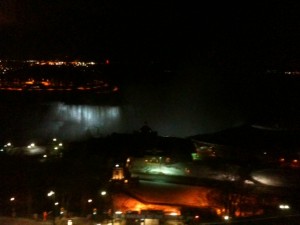 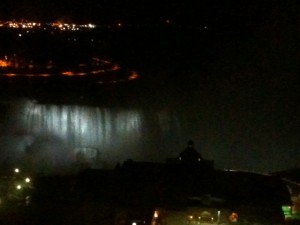 This was all well and good, but the best part of our trip (minus the lack of puke) was the shoe shiner in our hotel room. Listen Lady, this little guy was a delight to have. 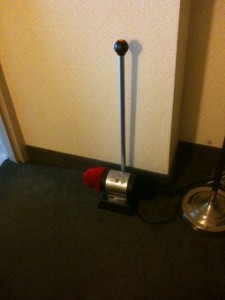 You can note that there is a single RED BUTTON  on the top of the shoe shiner and EVERY TIME Brett or I walked by, we pushed the button for at least 5-10 seconds of delight. I found it extra enjoyable as the sneakers I brought have a mesh top. On the bright side, this mesh would allow for the spinning brushes of the shoe shiner to produce air flow that would circulate around my toes. On the not so great side, my toes and socks are usually freezing as the mesh allows water and rain to soak through.

It’s really a random piece of equipment to have in a hotel that surrounds Niagara Falls. I mean….what type of businessman is walking around the tourist area of the falls or sporting his penny loafers to the casino? Certainly not anyone playing the penny slots.

I’m pretty sure Brett would have brought the thing home if it weren’t for me telling him that it probably would cost us $200 on the room tab.