This Lady has been out of commission for a few days due to the death flu. HOLY HELL. Cardin got this stomach bug while we were up in Canada and then she infected my parents, myself, and Brett. I think it’s now spreading to the extended family as well. Since you routinely come here for too much information, I’ll pleasure you with this tidbit. Brett described this stomach flu as “similar to your butt hole being a super soaker water gun”. Excellent…let that ruminate.

While Cardin was sick, she managed to get really dehydrated and she lost 2 pounds. Normally this would be a great diet, but for someone of her small stature this is a significant drop in weight. Brett Lysol’d the hell out of the house today and Cardin has now strapped on the feedbag so hopefully we are all on the mend. Her appetite has skyrocketed and, along with a wheelbarrow full of other food, in the past two days she has eaten 4 banana’s. Internet, that’s a massive amount of potassium for a 2 year old.  This kid isn’t going to crap for a month.

Before Cardin infected me, we managed to surprise Brett at work for his thirty birthday. 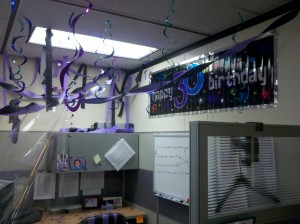 I conspired with one of his co-workers and got a whole bunch of decorations over to her so that she could decorate his cube while we were out of the country. 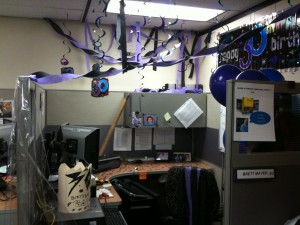 I even got that confetti stuff you sprinkle on the table and told her that she had my permission to sprinkle it ALL OVER his keyboard. He’ll be picking that shit out of his keyboard for months! Each time he’ll think of me….he’ll likely say a few choice words, but the point is I’ll still be on his mind. 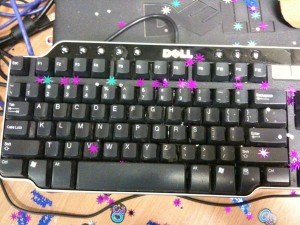 I secretly took the day off and Cardin and I got some 30th birthday balloons and a big number cake in the shape of a 30. We showed up, unannounced to surprise him. He informed me that he knew I was the one behind all the decorations as well. So much for a nice, quiet passing of another year. Cardin couldn’t wait to eat the cake and she loves the balloons we bought for him. I let her pick out the colors and she walks around saying “daddieee’s ‘loons”.

I had been telling Brett for months that I was going to surprise him for his 30th. He wouldn’t know when or where, but I would sneak up like a ninja. His only response was that if I did this, he would have more time and ammunition to return the favor in about 18 months. Listen Lady, I know that this will not happen for one simple reason. I’m the planner, Brett is more of the fly by the seat of your pants, last minute person. There is nothing bad about this, we complement each other well. I have a month by month agenda on my phone, he has a 5 minute memory span….it evens out. However, I know that if any surprise happens, it’s because it won’t be him planning it. Seems to me Watson, that there is a challenge somewhere in that last sentence.