Cardin was playing with a Snow White Barbie doll this weekend, prancing it around the house in her own pretend world, when I notated that Snow White had been stripped of her dress and was flying around naked. At first I was a little shocked because…well Barbies are pretty hard to dress and undress for 2 year old fingers. OK Lady….they are pretty hard to dress for 28 year old fingers and it takes me quiet a bit of coordination to get their clothes on or off.

I’m not particularly surprised Snow White was naked given Cardin’s age. Being 2 and a half she’s starting to understand her body and we’re getting on board with the whole potty training. She’s pretty good at taking off her own clothes and she manages to find the most inopportune time to strip.

This is pretty much in tune with my behavior as a kid as well. My Barbies were always naked, there clothes strewn about as though a tornado had blown through town. It was an indication of their free spirit and my hatred for small, tight fitting clothing. Where is your DAMN T-SHIRT COLLECTION BARBIE!!!!!!

As I was picking some things up Saturday night, I noticed that Cardin had left Snow White prominently displayed in her wagon. It had been a rough day for this poor doll. A lot of role-play and flexibility was involved. The poor thing looked tuckered out;l ike a lonely sorority girl gone awry after a night of hard partying. Rhinna’s S&M playing in the background, some dried up pizza crust laying on the floor, woke up not knowing whose floor she feel asleep on. 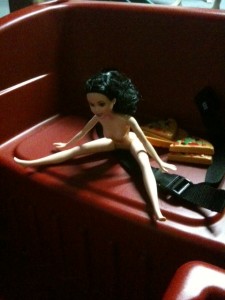 I fear there will be more days like this in your future Snow White.