Last fall we started by laying out a brick border and ordering 5 yards of dirt. In case you didn’t know….that’s an f’in lot of dirt. Since it was so late in the season we didn’t plant anything then and decided to let the dirt settle over the winter.

The weeds weren’t looking all that awesome lately, so we spent the weekend knee deep in mud as we tried to finish up the landscaping and planting actual shrubs and flowers. Ya know….pretty things that will likely attract bugs, incests, animals, and require an abundance of upkeep.

I had an idea of what I wanted to get a the local garden store and a rough estimate of how much it was going to cost. Everything I bought is a perennial, I steered clear of the annual plants, not touching those with a 10 foot pole. Who has time to plant things EVERY YEAR LADY.

Here are a couple pictures of the results. We haven’t put the stone down on the left portion of the house yet so that is still to come in the future.

More of a close up of our handi work 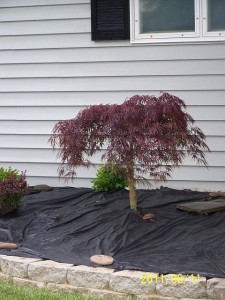 And finally I’d like to introduce you to Maurice. Maurice is our new Japanese Maple plant. Listen Lady, none of the other plants have names because they did not cost as much as my left kidney. He is special. He needs a name so that when I water him at night I can hold a conversation with him and he can feel loved. That way he won’t wither and die and I won’t feel the pain from flushing all the money down the crapper. I’ll discuss my day with him. He can be my eyes and ears of the neighborhood gossip circuit.

As I was taking some pictures Cardin was in the garage playing. She saw me outside taking pictures and wanted to come out so she pressed her hands and face to the glass door. Priceless kid.