Because we always have to make a scene

I took Cardin to the mall on Monday night as I was in search of a fancy shirt for a bachelorette party and by golly did we ever cause a spectacle. Internet, we’ve talked before about how shopping isn’t my forte, but I had a coupon and while my t-shirt that reads “spooning may lead to forking” is awesome, it didn’t seem to fit the etiquette for the party.

While I was looking through the racks, Cardin was tagging along behind me, chattering away to herself; finding it necessary to touch every article of clothing. I was watching her out of the corner of my eyes. I’m a mom so I’ve learned to be able to multi-task like this. Granted….only partially watching your child is probably not the best mothering trait, but I need to at least let the apron strings fray. 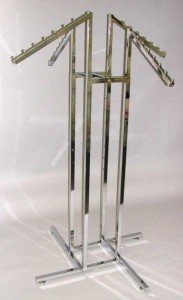 party. It was one of these 4 way displays, that allow a store to make optimal use of a small area. So, there she is, dancing in the middle of the rack and I call her name to tell her I’m moving on to the next section and she attempts to leave the small square where she is dancing. Except her foot gets stuck and she trips. In attempt to catch herself she puts her hands out and they land directly on the metal support posts and she is now pushing the whole rack over as she continues to fall.

WHAT’S THAT IN THE SKY. A BIRD? A PLANE? NO! IT’S LISTEN LADY TO THE RESCUE!!  In one bound, I leapt over a pit of alligators, scaled a 300 foot slippery wall, put out a forest fire, and managed to catch this twisted hunk of metal before Cardin was crushed by a rack of clothing.

I used my She-Ra strength to straighten the rack of death and pull Cardin from it’s grip. By this point she was screaming and crying about boo boos, everyone shopping in a 10 mile radius was aware of the events, and the workers in the store were acting as first responders to the situation. GET A GURNEY STAT!! I would have preferred to just crawl under the rug and not be noticed. Because we can’t ever go to the store and just have a normal shopping trip, we must always cause a spectacle.

Cardin walked away with no bruises and one minor scrap. Mommy wasn’t so lucky. I managed to tweak my back in my attempt to save Cardin from being crushed by metal, fabric, and hangers. Note to self…do not body build with clothes racks. Also, I did find a shirt.