We spent Saturday night having a pumpkin carving contest with some good friends. Initially I wasn’t really happy with the carving party, not because I dislike our friends, but because they always manage to out carve me and I strive to be the valedictorian of the carving party!

On a side note, baked Pumpkin seeds are one of my favorite things and the trick to great ones are mounds and mounds of salt. Not healthy…but delicious nonetheless. I justify this by the fact that I only get these delicious items once a year.

Once I had gutted a full pumpkin, I gave Cardin a pen and told her to draw the face she’d like me to carve out. I instructed her that she’d need eyes, a nose, and a mouth. I’m convinced Cardin actually heard….”draw all over the pumpkin with wild abandon”. By the time she was done, she had managed to draw a a line down each crease in the pumpkin yet there were no discernible facial features.

I completed carving my pumpkin, which is supposed to be a spooky tree, but looks more like a creepy hand with six fingers. I picked what appeared to be a good spot on Cardin’s pumpkin and carved out some facial features to offset the serious maiming this pumpkin endured at the hands of a 2 year old loose with a pen. 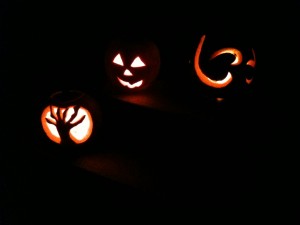 Here is one with the ham face posing (note that she is wrapped in a princess blanket). 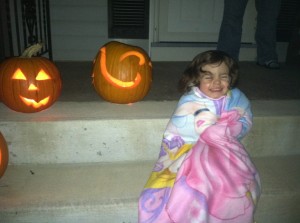