This year for Halloween, Cardin decided that she wanted to be a hamburger. This was pretty surprising to us since she’s very much into princesses, nail polish, and all things girly. Needless to say I was totally on board with the hamburger costume. 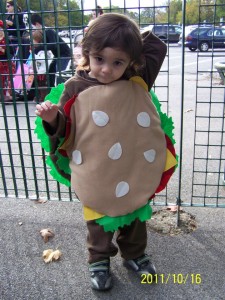 We hit up zooboo at the Senca Park Zoo over the weekend and did some trick or treating amongst the animals. Cardin could have cared less about the animals she just want the CANDY!

All the kids were dressed up and even some zoo characters. She took a picture with a giant lion, which is pretty impressive since I was having heart palpitations just looking at the creeper.

There are trick or treat stations setup throughout the zoo and as you hit each station you got a stamp. As we were heading between stations, Cardin decided she wanted to eat some of the candy she had collected. I satisfied her with a Hershey bar, but within a few minutes she was asking for more. She really hasn’t been exposed to a plethora of candy mostly because she gags on food like its her job, but I was feeling generous and risky.

Attempt #1 was with a crunch bar. I made sure to emphasize that there were crunchies in the chocolate. She took one bite, spit it out, and said “I don’t like it momma.”  Fail #1.

Attempt #2 was with a box of nerds. She tossed back a couple and made a sour looking face. Then proceeded to tell me “I don’t like it momma.”  Fail #2.

Attempt #3 was with a pixie stick (not that I had much faith after the nerds). I poured a tiny pit of the powder onto her tongue and she wouldn’t even retract it back into her mouth. With her tongue hanging out she said “I don’t like it momma.” Fail #3.

We finally settled attempt #4 on sour smarties. Again…I wasn’t overly optimistic and as expected she spit out the smarty and said “I don’t like it momma.” Fail #4.

By now Brett and I had consumed a portion of each of her pieces of candy and the glass wasn’t looking even a quarter full for the remaining pieces. Listen Lady, considering her track record with candy appreciation at the zoo, Halloween is looking awesome for Brett & I.

We finally distracted her with a trip to the playground. She ran around for 10 minutes going up and down the slide. At one point my delicate little flower got up to the top of the slide and there was a boy, dressed in a spider man costume, who was holding up the line. Cardin gave him one looked and yelled “GO”. Clearly she must be getting over her fear of bigger kids.

At the exit to the zoo, if you have collected all your stamps you got a small stuffed animal. Cardin picked the Heyna and hasn’t put the thing down since we left. We named him Henry the Heyna and as we left the zoo she talked to him the whole way in the car.