This past weekend we had Cardin’s princess themed birthday shindig. Originally, Cardin had asked that the Disney princesses be in attendance at her party. This didn’t seem like a feasible request, so I compromised with these homemade 3d paper dolls. I told Cardin that the princesses could not make it to the party, but they had sent these stunt doubles instead. She seemed rather impressed. 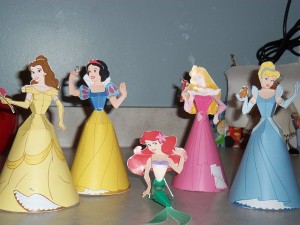 It took an obscene amount of time to cut out their tiny features and not lope off any extremities in the process. Gluing the bust on was such a delicate process that it required tweezers, tiny sewing scissors, and a flashlight. I felt like an 82 year old man who was putting together a ship in a bottle. The crafting gene didn’t really get passed down to me, I’m more of the “slap a sticker on it and call it a day type”, so this was quite the feat.

Cardin was more than anxious to open her gifts and with every box that was opened, more pink princess items appeared. Every gift she opened contained some reference to princesses; whether it be clothes, toys, or dress up attire. Listen Lady, I was beyond jealous.

By far, her favorite items are the dress up Snow White outfit; which includes headband, dress,

and light up shoes. Accented with a matching Snow White barbie doll. She has been inseperable to these items since the party and I practically have to pry the dress off each night just to bathe her.

We completed the evening with princess cake and homemade ice cream. Complete with a number “3” candle. After we sung her happy birthday and I gave a piece of cake to Cardin, she proceeded to only eat the whip cream frosting off the top. Excellent choice lady. 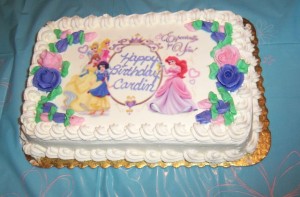