Our tale begins on a cold day back in February of this year. Excitedly, Brett and I found out that I was pregnant and were armed and ready to receive all sorts of flak from family members for cramming another birthday in the month of November. Things didn’t work quite the way we anticipated and within a few weeks we were told the pregnancy wasn’t viable.

We left, heartbroken, but managed to become closer after this defeat. The summer months went by and we struggled with the decision on whether to try for another baby. We wanted more children, but the anxiety and “what if” questions loomed.

Ultimately, the decision came down to one factor; Cardin needed a sibling. She needed someone to grow up with. She needed a cohort to be able to rely on and cause mischief with; not just for her childhood, but for her future too. There will come a day where Brett and I will no longer be here, and I need to know that Cardin will have someone else to share childhood memories with, to carry on family traditions, to call when she needs to be bailed out. I need to know that, if Brett or I were to get sick and unable to care for ourselves, Cardin is not alone in bearing the burden of health decisions that may need to be made for us. In the end, the decision was simple and while it did not resolve the anxiety we felt, it was the right choice for her future.

Soooo…we made a compromise. We would take Cardin to Disney World and afterwards, we’d try to have another baby. Brett wasn’t fully convinced on the trip, but I felt it was important. It would be our last big adventure as a family of three and we’d be able to experience the joy of Disney through Cardin’s eyes alone. Plus it would allow us to spend quality time with her before chaos erupted in our house.

This was the plan….funny thing….life never seems to go according to plan. After we had made reservations and paid for the trip to Disney, we discovered that I was pregnant again. Thanks Karma. Your reputation as a bitch precedes you.

We waited anxiously for weeks, going for handfuls of blood tests to monitor HCG levels, and attending four ultrasounds, but we’ve made it to nearly 13 weeks. 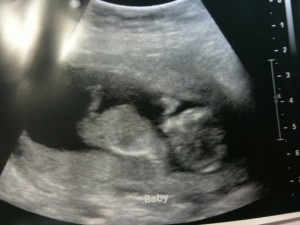 After about 9 weeks, we told Cardin that Mommy had a baby in her tummy. She’s seen pictures and come to the ultrasounds, but she still doesn’t fully grasp the concept; she likely won’t until my belly shows. When we asked her if she’d like a brother or a sister she responded with “a girl or a chicken”. I’m really hoping its not a chicken because I fear the pecking.

Each night I come home from work, we retreat to the bedroom and listen to the baby’s heartbeat on a doppler that I purchased while I was pregnant with Cardin. First it’s mommy’s turn and then Cardin gets a chance to listen to her belly; apparently she has a penguin residing there. One night I asked her what the baby’s name should be; anticipating that she’d come back with Snow White or Belle. Instead I was surprised, she dubbed the baby Diego. Thus forth, we have referred to the baby as Project Diego. I suppose this will suffice until Brett and I decide on a name.