For Cardin’s birthday this year, one of the gifts we 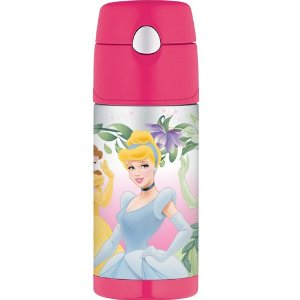 purchased for her was a princess thermos. We purchased this specifically so she could bring it to Disney World and would have a larger cup to hold a drink throughout the day.

For all intents, the thermos works great. It holds a decent amount of beverage, keeps it chilled for numerous hours, and doesn’t spill. However, there was one major problem during our trip. During takeoff and landing, the thermos becomes presurrized; much like the fluid in your ears.

I know this for a fact because prior to our flight, we had placed chocolate milk into the Thermos. After we had boarded the plane and taken off, Cardin asked for a drink. I grabbed the Thermos and pushed the button to pop the lid. At that exact instant a stream of chocolate milk shot all over my face and shirt.

Listen Lady, I’m not talking about a little trickle of milk either. The velocity at which the milk exited was so intense that I actually heard the thermos release a “ppppffffttttt” sound as the milk exploded in my face and the pressure released.

I was taken by such surprise and shock that I was unsure of how to proceed. I turned to Brett, shook him awake, and waited for help as the milk dripped down my face. He looked at me in awe and disbelief before the fit of laughter started.

I spent the next 30 minutes of the flight, using baby wipes and a tide to go pen to try and clean my light blue shirt, which now had brown milk stains all over. I can just imagine what was going through the flight attendants head as she handed me peanuts.

To finish off the milk disaster, one of the “perks” of staying on Disney property is that your luggage is delivered to your hotel room from the Orlando airport; with no need for you to intervene. Awesome benefit, except that the luggage didn’t arrive that night until 10 pm and I had not packed an extra shirt in my carry on. EPIC FAIL.

So, I got to attend dinner with Chef Mickey that evening with my milk stained shirt; which was now starting to smell a bit spoiled. Hopefully the characters vision is so blurred behind those giant heads they didn’t notice the brown stains.