Last summer I broke my spectacles; right at the corner, where the band flexes to open or close. YEA. AWESOME. Except, at that point, the glasses were fairly new and I was fairly pissed as I had spent over $400 on them.  Since I don’t regularly wear my glasses and our vision insurance was awful, I felt obligated to prolong their life.

Therefore, I performed some extremely delicate surgery on the frames. I used twisty ties and kite string to fashion a support beam that would enclose the band and allow me to continue to wear the glasses. My fix wasn’t pretty and I walked around what appeared to be a giant white pirate patch attached to the side of my glasses, but it worked and for the few hours each night that I wear them, they suffice. The only downfall was that I couldn’t bend them to put them in any sort of carrying case. Minor design flaw. 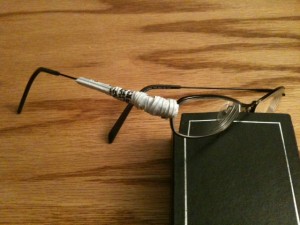 Towards the end of 2011, our company began their open enrollment period for benefits. Normally, Brett carries our vision insurance through the school district because its a state run program and the prices are extremely better than what my private company can offer. However, my company switched vision providers and I knew that my kite string fix wasn’t going to last forever, so I signed up for additional vision coverage starting the first of the year.

I also knew, from previous experience, that when I went to the hospital to deliver Rory, I was not going to be allowed to wear my contacts. This is an actual regulation the hospital has for anyone who may need surgery, for example a c-section. Doctors don’t really want to contend with the possibility of side effects, such as swelling or inflammation, if a patient were to wear their contacts during anesthesia.

My choices were down to:

Any rational person would also be concerned with having all the doctors and nurses see you with these ridiculous looking glasses that have been patched beyond belief. Let me assure you lady, this will be the least of my concerns as 20 doctors gather to feel my spleen and watch me deliver a baby without managing to rupture an internal organ. It’s a skill.

We went over the weekend to one of the local vision centers so that I could get an updated eye test and order a new pair of glasses. The eye exam proceeded without incident until the doctor wanted to dilate my eyes. That is until he noticed my belly. Apparently, pregnant woman cannot get their eyes dilated because the dye may seep into the bloodstream. Don’t drink, don’t smoke, don’t eat a lot of fish….I’m up on all these; dilating eyes….not so much.

After the test, I picked out a pair of Ray Ban frames and waited to have them measured and fitted for my eyes. I had expected a good three to four hundred dollar expense, but was pleasantly surprised when the price quote came back as a meager $57. Listen Lady, at first I was all “come again”. That price seemed unheard of for glasses and yet I was questioning it? The sales rep confirmed that the vision insurance company would cover the cost of the frames and lenses and the $57 was the co-payment I needed to make.

I hurled my credit card at her before she changed her mind and we picked up my new glasses. Hopefully these frames will last much longer with much less intervention. Bet you can’t guess which pair is the new one? 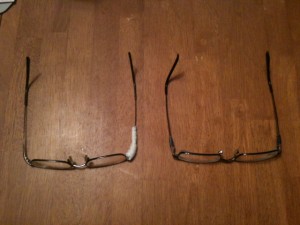