The case of the giant booger

Cardin has a tendency to develop gigantic boogers. I’m not exaggerating here either, Brett can confirm their massive size. The other day, one booger came flying out of her nose that was easily as big as my thumb nail!! It was the king of all boogers!! (It was so big that it requires extensive use of exclaimation points) LISTEN LADY, how are you breathing?!?!?! Your nostrils are not even that large. 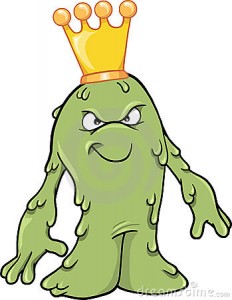 We can’t get her to understand the concept of blowing out of her nose, instead she just spits out of her mouth. The boogers hang around for some time and I’m convinced this squatting effect allows them to quadruple in size.

One night last week I offered to be Cardin’s personal booger digger and grab the sucker with a Q-tip so she could actually breath. Don’t get ideas, this isn’t a role I would take on for anyone but my own kid. This was unacceptable and we must have tried blowing her nose 50 times. As a side note, each time you blow her nose you must utilize a new Kleenix. Hopefully this fresh Kleenix need does not turn into another OCD habit. Needless to say the Kleenix box was looking mighty empty after our failed attempts to grab the giant booger.

A few nights later the case of the giant booger was solved when I was giving her a bath and washing her face.  Clearly the steam from her bath and me using a washcloth was enough to dislodge the culprit that had been plaguing her sleep for a few weeks. This thing could have gone in the Guinness book of world records.

She was able to sleep peacefully that night, without snoring like her father. Since then, the boogers seem to have regenerated themselves. These always look lovely, especially since she’s such a lady and wants to be dressed up all the time.