After bath time the other night, Cardin decided it was again time to load up on some fresh ink from her newly acquired princess tattoos.  After I had completed putting at least 5 tattoos on her body, she informed me that Rory also needed a tattoo.

Since I wasn’t keen on the idea of inducing labor just to slap a temporary tattoo on his skin, I told Cardin that she could put the tattoo on mommy’s belly and that would suffice. She picked out a tattoo of Sebastain, the lobster from Little Mermaid, and slapped it right above my belly button. AWESOME. 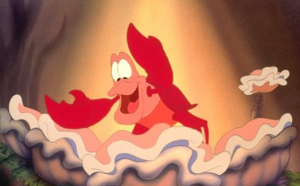 This was all good until I began another regime of excruciating pain later that night and thought that we were going to need to head back up to the triage center. I was going have to explain to the nurses and doctors why I had a tattoo of a Disney character on my belly. I’m sure they have seen worse, but I can only imagine that they would not believe I was taking orders from a 3 year old. Luckily, I was able to cease the pain with the medication I have and since removed the offending tattoo.