Defeated by an Infant Toy 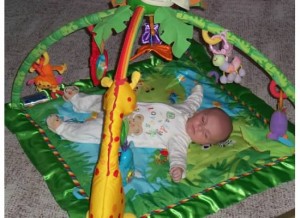 Internet, meet Rory’s Rainforest playmat. According to the ‘unnamed’ company who made the product, it’s a delightful gym with music, lights, nature sounds and plenty of activities and textures to stimulate a growing baby….or some bullshit marketing ploy like that.

It’s been a number of years since we had this out for Cardin, so I forgot about all the settings on this puppy, and was a little concerned the other night when I put Rory on the mat only to have the music and lights continually turn off after playing for only a matter of a few seconds.

Naturally, I assumed the batteries were dying. Much to my dismay, I quickly found out, this was not the cause. In my second attempt, I disassembled the entire structure and followed all wiring and electronic connections to ensure that cables were touching sensors, nothing had become detached, etc. When I saw disassembled, I’m not talking one or two screws, I’m talking 20 screws; battery compartment, tubing for wires, electronic compartment housing circuit boards. The whole she-bang.

Listen Lady, it was only after I had ripped the entire playmat apart, did I realize that this gym comes with a couple different modes. The first mode offers 20 minutes of continuous music. The second mode is triggered by the baby’s movements; intermittently setting off about 15 seconds of lights and music so the baby can develop a cause and effect relationship.

Cardin must have switched the playmat to the second mode and mommy didn’t quite catch on to the cause and effect relationship until much later in the game plan. The playmat has been reassembled now. Though Brett nearly lost an eye when he made a smart ass comment and I threatened his life with the screw driver I was wielding.