Do they vacuum the cows?

Herein lies an epic blog that has taken months to come to fruition folks. Before Rory was born I made the decision to formula feed him. Send the hate mail now, defriend me, throw small children at my house…I know I’m not going with the status quo of “Breast is Best”. As it turns out, my knockers are no good for my kids. You see Internet, Rory has a milk allergy.

Let’s rewind a little to when he was born. We started out with regular formula and, by golly, if that did not clog up the poor kid like a drug mule. He didn’t poop for 3 days. Listen Lady, I really thought I saw poop behind his eyelids one day. His gas was so bad that the Soviet Union contacted me and offered me $20 billion dollars to bottle his flatulence and use it as biological warfare. I’m kidding. Please don’t kill me KGB.

No joke on this one though…we were at calling hours for my Aunt one night when Rory let a fart rip that cleared the entire room at the funeral home. Except for my poor, deceased aunt who had to bear the brunt of the toxic fumes that lingered in the air, may she rest in peace.

Since Rory’s colon was working in similar fashion to a nuclear reactor, we switched him over to Soy and also started to give him an ounce of prune juice each day to help with his constipation. The prune juice did the trick, but the Soy did little to help with the agitation and colic issues he was showing. He would drink a bottle but scream in pain during the middle of it. No good.

By the time he was 5 weeks old we were on our third round of formula; each time increasing in cost and decreasing in quantity. This time we went to a special, hypo-allergenic formula. Rory’s allergy is not actually to milk itself, but to the protein in milk and this formula is designed specifically for that; with the protein sucked right out. I like to think they use a giant dyson and vacuum the cows as they are milking them. Makes sense to me.

Since this is not just an intolerance to milk, but a true allergy, there is the potential for the insurance company to pay for this formula. The only catch….be prepared for a battle.

Getting the formula covered, requires a prior authorization from the insurance company and a direct order from a pediatric gastroenterologist. Of course, those doctors are considered specialists and we all know how long it takes to get in to see a specialist. We waited for nearly a month just to get him to be seen by the doctor. Once he had been seen, it took a week to get the prior authorization through and approved by insurance. And that only occurred because I held the hand of the doctors office to get the ball rolling. I was a thorn in their side; often calling multiple times a day to check on the status of the authorization, or to verify they had faxed or received paperwork that was needed.

Listen Lady, at one point, I lost my cool and yelled at the charge nurse. She’d pissed me off enough that day and I was all, “MY SON SHOULD NOT SUFFER BECAUSE OF YOUR INCOMPETENCE.” Sure enough, the prior authorization was approved that very day and the prescription was sent through to the pharmacy that afternoon. Coincidence? It just proves my point that bitching is the only way to get what you want. Sad, but true.

After finally battling through all the insurance red tape and the monkeys who run the pediatric gastroenterology office, I thought we had finally won. We could get the prescription filled and we’d be on our way to a happy, healthy boy. And this is where I would be wrong.

The pharmacy we use called to tell me that they needed to order this formula, as they do not carry it in stock and it would be in from their wholesaler on Wednesday afternoon and ready for pickup. Not a problem, we had plenty of formula to hold Rory over until then and I’d come pick it up.

After work on Wednesday, I swung over to the pharmacy to pickup the prescription. I went to the register and gave the tweener bopper working behind the counter my name. A quizzical look ran across his face as he pulled up my account and said, “Oh, I’ll be right back”. Right then, you know it’s just never going to turn out well.

Mr. “I have enough pimples on my face I could use it as an abacus” returns with the head pharmacist and I’m inspired when I hear this conversation.

Pharmacist: “Yea, Mrs. Mayer…We ordered the quantity incorrectly for Rory’s prescription. Instead of ordering 32 cans of formula, we ordered 32 cases. And when we realized our error, we tried to cancel the excess cans but instead canceled the whole order. So now we don’t have any of the order for you.”

Me:(while biting lip) “mmmm hmmmm. And you couldn’t have called to inform me of this? So when exactly will you get the order in?”

Pharmacist: “You’re right. I’m sorry, we should have called to tell you. We re-placed the order, so the 16 cans should be in tomorrow, I promise. And to make it up to you, I’m going to waive the co-pay on this order”

Bright and early Thursday morning my phone rang. Low and behold it was the pharmacy calling to tell me that once again, the order had been placed incorrectly and only 4 of the 16 cans had been received. Really buddy? Yesterday you promised. You’re lucky this one wasn’t a pinkie swear.

The pharmacist was very apologetic and because of all the ordering problems he even personally delivered the 4 cans of formula to us so we would not have to make another trip out to the store. Unfortunately, the remaining 12 cans would need to picked up next week as another order would not be due in until after the weekend. Why not….let’s extend this cluster fuck another week. 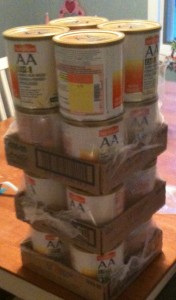 Last night I went back to the pharmacy and tested the waters again. As luck would have it, the full order had come in and I went home, with GOLD in hand.

When I got home, I checked the cost of the prescription and discovered why the insurance puts us through such rigor before agreeing to pay for the formula. My eyes almost reached my toes on this one. Thankfully, Brett carries excellent prescription insurance coverage. 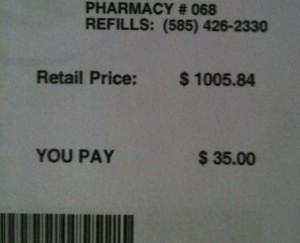 We should be set now. Rory is doing wonderfully on this new formula. He is gaining weight like a champion and will hopefully grow out of his milk allergy at some point in the future.