Won’t you be my neighbor?

The house next door to us has been empty for almost a year now and was finally put up for sale a couple of months ago. It was previously inhabited by an elderly couple, but we began to notice a steady decline in the general upkeep of the house and yard. Eventually, we learned that the wife had passed away and the husband had moved into an assisted living center.

A few months back, a for sale sign popped up in the front yard and all sorts of commotion was occurring on the street as people would creep by, real slow like in their cars, to check out the digs. I think most were scared off when I stood on the front porch and stared back. Perhaps it was my hollow stare, perhaps it was my underwear. One way or the other we still don’t have a new neighbor.

Since I’m nosy, I decided to check out the pictures of the inside of the house online. SCORE. You would not believe the awesomeness that I found. Listen Lady, if you do not own a house, or even if you do….YOU NEED TO GET IN ON THIS SHIT.

Purchase of this house comes with a free Rascal Scooter (plus one fugly ass couch). Right there, in the middle of the living room, sits you’re childhood dream ride.
LOOK AT THAT BEAUTY. 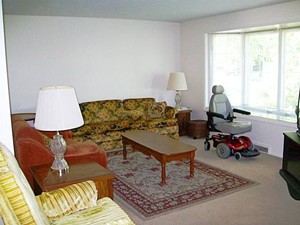 Tell me, that it’s not the worth all those pennies you’ll pay towards closing costs?!?!?!

Think of the fun you could have with this sucker. We could set up indoor race tracks. Obstacle courses. It could be “Minute to Win It: Rascal Style.”

I’m seriously jealous of whoever buys this house. On a refined note, if you’re not crazy, please consider moving in next door. Though I warn you, the house needs a lot of upkeep and I like to walk around in my underwear and stare at people.