I’d like to introduce you to another disgusting talent that both my children have acquired. Please note, they have in no way gotten this lovely quality from their maternal side. In fact, I’m not even sure it was a genetic factor taken from one of our 46 chromosomes when they were conceived.

Listen lady, both Cardin and Rory have the innate ability to harvest the most gigantic boogers in their nostrils. I’m talking the size of my finger nail; and these kids have little nostrils. 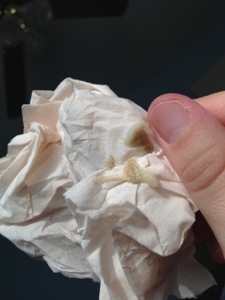 Take the above picture. I pulled these two green giants out of Cardin’s nose this afternoon. The kid must be a total mouth breather with these dam blockers in the way. I was surprised I didn’t see the Niagara river rushing out of her nostrils when these came dislodged.

We aren’t even going to touch the fact that I voluntarily reach in, up to my elbow, and rip out these alien creatures. As the mommy, it is my designated job to be their booger picker; until such time as they can publicly embarrass me by picking their own nose during the middle of their 4th grade concert.