Listen lady, I have frequently blogged about Cardin’s incessant vomitting and sensitive gag reflexes. We feared any other child we brought into this world would surely have the same Olympic puking ability.

I won’t lie, the amount of puke I caught bare handed was directly proportional to the length of time we waited to have Rory. In fact, there was a short window where we even questioned having another one for the simple fact that we didn’t have enough hands to catch all the puke if two kids existed in our family dynamic. Needless to say, introducing another catalyst was a giant risk.

As it turns out, we struck gold. Rory doesn’t seem to have a puking problem (at least not yet). Instead, I’d like to introduce you to Mr. Brown 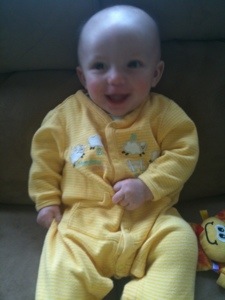 Rory has the opposite problem. He poops SOOOOOO much, that he explodes all over his clothes. We’re not talking a little blowout every once in awhile either. We are talking daily blowouts that cover him from his shoulder blades to his knee caps. Based on the quantity of formula and baby food that enters his system, the amount of poop that is expelled from his body is totally unnatural. It’s as though he is going through an adult colon cleansing every single day.

More poop comes out of the diaper than actually stays in and we are struggling to come up with unique ways to lift the onesie over Rory’s head without giving him a faceful. Eventually, it’s going to get so bad that I’m going to have to go all EMT style and just cut the clothes off this boy.

This has been going on for at least 2 weeks now and we have gone up a diaper size too. I’m considering wrapping him in plastic before the day is through.