Posted by Christine on November 2, 2012 in Uncategorized | ∞

Rory went for his 3D computer generated head scan on Wednesday because of his Plagiocephaly; or a flattening of his skull.

Since his last appointment, we got word from the insurance company that the cost of the helmet would be covered at 80%; minus our deductible. Typically, these helmets cost in the range of $3,000-$4,000 to create. It seems outrageous at first, but considering they are molded to the exact dimensions of your child’s head and the cost includes bimonthly adjustments, it’s not really that much. Whatever the cost to us, he’d receive the treatment.

To take the 3D image, Rory wore a special skull cap that tied under his chin. This skull cap allowed a sensor to be attached to the top of his head. The sensor, linked to the computer, was able to place Rory’s head in space; even while he wiggled all over. 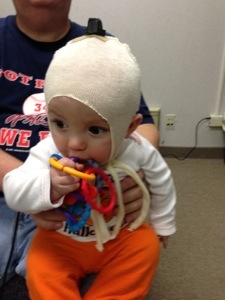 Using this sensor as a starting point, a laser scanner was used to take a scan of all four sides of his head. As each side of his head was scanned, the 3D image would slowly fade on to the computer screen. Listen lady, it was amazing to see his facial features become soooo computerized. The bright eyes and goofy grin I’ve become so accustomed to were now splayed on a computer screen for a man in Tempe Arizona to use as a guide to create a helmet. 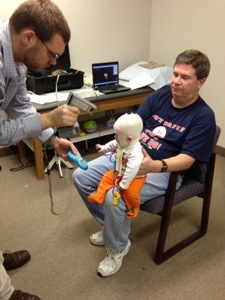 Rory did amazingly well through the whole scan. He was happy as a calm and didn’t give a damn about what was on his head. We can only hope that we are so lucky when we go back for the actual helmet fitting.

Side note: we never lost power from hurricane sandy and the sub pump worked like a champ. Brett did a super marvelous job replacing it and we had no wind damage either. Grateful for our safety.