Last week we picked up Rory’s new helmet. It’s been a bit of an adjustment for the whole family, but mainly the poor little guy.

As each day progressed, the length of wear was increased slightly. Each time we removed the helmet we were to check his head for any redness or sore spots. All looked well. Until he wore the helmet overnight and he began to develop the mother of all blisters. 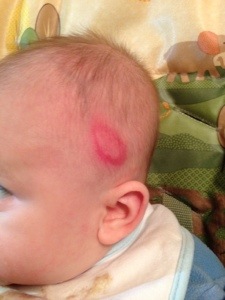 It was SUPER red and very swollen. Like an orange on a toothpick swollen. I refused to put the helmet back on until we returned to the clinic so they could shave and reshape the helmet so it wouldn’t rub so much. Unfortunately, we couldn’t get in for two days.

In the meantime, the swelling and redness seemed to go down and the blister seemed as though it wasn’t going to break open and be an open sore.

I put Rory to bed on thanksgiving and he was clean as a whistle. When I retrieved him from his crib on Black Friday, I walked in on a bloodbath. His blister had broken open during the night and there was blood all over his head, hands, and crib. Listen lady, this is not the scene a mother should walk in on. Your infant should not be covered in blood when you walk into their room unless your name is Courtney Cox.

After my minor freak out, we cleaned him as best we could and bandaged him up. He seemed rather unaffected by the open sore until such time as he went to bed and once again ripped open the small scab that had formed.

By Saturday morning he was running a fever and my only thought process was, for the love of god the blister has become infected now. Once again, for the 5th Saturday in a row, I bundled one of my children up and took them to the doctors.

The Peditrican relieved my worst fear and said the wound wasn’t infected, rather, Rory just had a head cold. They did clean and dress the blister for us and now Rory looks like a pirate. Aye, matey 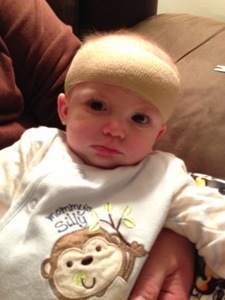 As for his helmet….we need to wait until his blister heals before we can let him try wearing it again.