Changing of the seats

Meet my little chunk. On Friday I had to take him to the doctors because he was coughing like a maniac and very congested. He weighed in at just under 20 pounds. 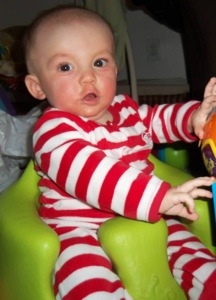 It’s a good thing the boy just got new clothes for Christmas because he was busting out of his 6 month outfits. Everyone would ask me what size he’d need and scoff when I told them 12 months. Listen lady, look at that Buddha belly. It’s adorable and cute but the boy can take down a jar of baby food like you wouldn’t believe. Wait until he gets teeth, my fingers will be next.

This is in complete contrast to the other mini me I birthed, who took nearly two years to reach a solid weight of 25 pounds. We are on uncovered territory here folks; I’m walking blind bitches and the boy just keeps peeing in my face.

Since he is growing so quickly, we decided it was time to move him into the rear facing convertible car seat instead of the infant carrier. It’s nearly impossible to lug him, with his winter gear, and the infant carrier anywhere. It’s as though you are dragging around a deer carcass that smiles at you.

Brett and I spent the good part of Saturday morning being ever the good parent and doing our due diligence on a new booster seat for Cardin so we could use her current seat for Rory. In the end we gave up and just went eeny, meeny, miny, moe. It’s all just a big crapshoot anyways, right?

I’m kidding, we picked a very safe, 5 star rated, side impacted tested booster seat with a latch system and the damn thing even has its own personal cup holder. Most important to note though: it has a removable cover that I can take off and wash. Gee internet, would you like to take a guess as to why we felt it necessary to purchase the model that offered this feature?????

Luckily, I had a bunch if coupons and rewards dollars so we ended up getting one of the three booster seats for free. Brett spent the better part of Sunday uninstalling, installing, tightening, and loosening the carseats into place in our cars. It’s one of his FAVORITE parts of childcare. And to think, our parents just let us roll around in the back of the car.