Over the weekend the town we live in celebrated their bicentennial birthday. They hosted a parade and concerts along with a great display of fireworks.

Local businesses and groups were asked to march in the parade. The preschool that Cardin attends held a sign up sheet for attendees and we joined along in the marching fun.

We decked out her wagon with flags and garland. Listen lady, we had the cadalliac of wagons. 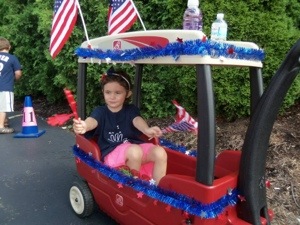 Things were going great until we actually started marching. Since there were so many groups marching we lined up in sections and then each section joined the main drag. We had no visibility to the group behind us until we got on the main road. Wherein we saw the fatal blow; the group directly behind us was firing muskets.

Cardin has never been a fan of loud noises; fireworks, thunder, horns…they make her skittish. And by skittish I mean, the kid is typically climbing me like a monkey and sounds like a hysterical banchi being eaten by an alligator.

So you can imagine the blood curdling scream that emanated from her mouth after the first musket round went off. Bawling tears ensued and I ended up carrying her and dragging the souped up wagon a good portion of the parade; belching screams erupting after each musket explosion.

By the end of the parade, tensions had eased a little and she had become moe accustomed to the gunfire. Though she refused to leave the wagon, believing it would ensure her ultimate safety. Maybe the wagon has magic just like bedsheets?

Later in the evening we attended the fireworks spectacle and we were actually able to sit and enjoy the show without Cardin freaking out over the explosions. She even said the fireworks were fun. WHAT??!! Where is my kid??She didn’t cover her ears, cry, or huddle in one of our laps. It seems she needed to walk through a war zone to desensitize herself.