Listen lady, last night I found the most gigantic beast of a spider in our Italian garage. Not kidding. It was playing with the kids kitchen set. I immediately defended myself with a wiffle bat and ran for high ground.

Brett was putting Rory to sleep so I was on my own in defending the family name….to the death you mighty bastard. I did the only sensible thing. I took one of the kids toy containers and quickly chucked it over the spider; capturing the beast. Then I ran inside and told Brett he had to kill the thing.

Listen lady, I do all the womanly/house wifely things, it is totally his job to kill giant spiders that lurk in the dark. The thing was the size of my hand. I saw fangs!!!! Big, sharp, pointy teeth.

When brett went out to kill the thing, he took a photo of it and then looked it up. It is called a wolf spider and it’s venomous. Oh that’s right, now we are toting around venomous spiders in ghetto gates. I find another one of these things and my house is getting bombed.

Over the weekend we celebrated Rory’s birthday with family and friends. It was a perfect day; the weather cooperated, we enjoyed the first picnic of the year, and made some great memories. I’m grateful for all the love that is shared for my little tanker.

So my little man, I write this blog for you….

One year already and look at the smiles and giggles you have brought out in our family. It is hard to believe you are already a year old; the past 12 months seem to have flown by so quickly and yet you seem to fit perfectly into our family. What did we do before you?!?! 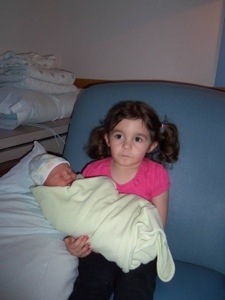 As second time parents, we welcomed you home with less apprehension than we did your sister and we instantly saw your laid back personality come out as you started smiling and babbling.

You are my smiley, happy boy. Always such a “go-with-the-flow” attitude. Hold on to that; it will serve you well in later life. There is so much to fret about and get caught up in with this world, a serene attitude may help to steer your ship through rough seas. 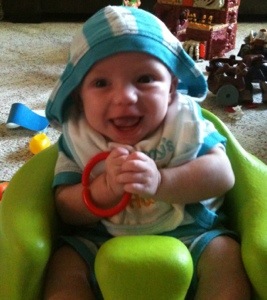 Around month 4, you threw a major curveball into our solar system when you were fitted for a helmet that you wore for 23 hours a day to correct Plagiocephaly. The first couple of weeks were rough and initially you hated us every time you would see the helmet or hear the “rrrrrripppppp” of Velcro, but you pulled through like a determined champ. I’m keeping that helmet forever and I’ll show it to you when you are 18 and remind you that with time, all things can change.
br /> 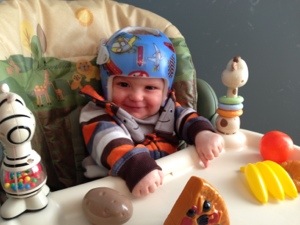 You have always loved music, even as a small baby; it seems to settle you. You prefer to sit with daddy at night before bedtime and you absolutely love to hump pillows.

In the last few months, as you’ve become more coordinated in crawling, standing, and walking, we have seen a new independence emerge from you; albeit one that is all rough and tumble boy. We’ve lost many a toy to the Rory memorial already.

Just a year ago and the doctors were concerned that your lungs were too immature for delivery. Look at you now little man. Thriving, growing, and learning every day. Happy birthday sweet boy. 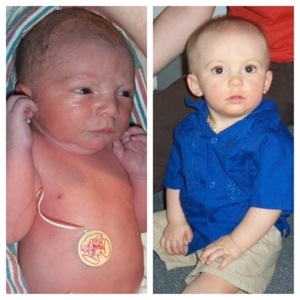 Preschool comes to a close

Today was Cardin’s last day of preschool. It seems like just yesterday we were taking pictures of her first day and watching her walk into the realm of public education.

She has flourished in this setting; growing more independent everyday. She is smart and funny. She brings home crafts everyday and new songs. She has made friends among her classmates and makes believe with them at home.

The best part of her personality shines through in her honest witty responses to our questions. The best parts of my day are when she pulls some ridiculous answer out of left field and my belly hurts from laughing so hard.

Congrats Cardin, on a job well done. Mommy is super proud of you.

Rory is nearly walking folks. He will walk along furniture and using a push along toy. He has also figured out how to plop down on his arse.

I’m really excited for him to walk, mostly because he is such a tank and he is in such a transitional state right now and he walks around like a drunk college kid released from their first frat party; there is a constant need to hover and pull his pants up.

You would think that by the title of this blog, I’m going to punch out some serious shit about three landscaping projects, right? Well, you’d be wrong.

In fact I’m only telling you about one project that has taken us three years to complete. That’s right lady fans, I said years; which, ironically, was the perfect amount of procrastination for this project.

When we bought our abode, about seven years ago, it looked like an unkept teenager’s hairdo; what with all the unruly bushes that surrounded the house. 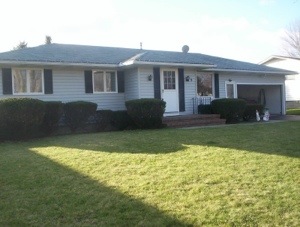 I’ll just get this out of the way now. There were 27 shrubs planted around our house; all of varying sizes and styles. Nonetheless, twenty-fucking-seven. We know this, because we dug each stump out by hand. With hackets, axes, and sledgehammers.

What is better, these shrubs, which were never maintained by the previous homeowner, are called “Yew” shrubs and can live for 1,000 years. As in “you have got to be freaking kidding me. These are like the mortal kombat of all shrubbery. Raiden wouldn’t even be able to get the stumps out using his finishing move”.

In the fall of 2010, we finally had removed the last of the stumps and we laid the brick border for the new landscape by hand. We filled in the hole with 5 yards of dirt and planned to let the dirt sit over the winter and settle some. Since it was so late in the fall, we didn’t have time to put new plants in and have them root before the frost would come.

Fast forward to spring of 2011 and true to plan, we planted all our new landscaping plants. 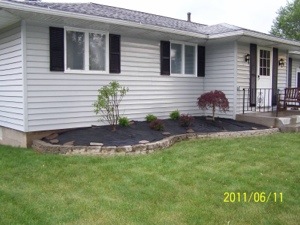 Listen lady, our intent was to finish up by putting on landscaping stone come the fall of 2011. The summer was brutally hot and I refuse to do physical labor in 95 degrees; it was stated in my marriage vows. However, by the time the cool weather had hit, I had a baby in my belly and record setting spleen stretching competition had begun.

Lets face it lady, 2012 was pretty much a bust. Between the pregnancy complications and the time I spent in and out of the hospital for surgery and recoup, there was no way any landscaping project was getting done unless I paid an illegal Mexican.

Which leads us to the fall of 2013. I vowed that 3 years was enough procrastination. Brett placed the order for a bulk delivery of stone and we got to work. It didn’t take nearly as long as we anticipated and we calculated the quantity of stone that we’d need perfectly this time around. Nailed it! 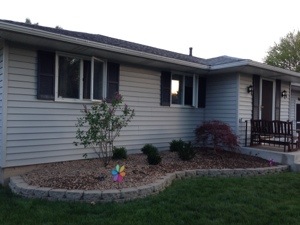